'The Someday Funnies' became penultimate beat generation ballad track in hard copy Veer book with Mr Weller unaware (2010) that Someday Funnies had at last found publisher. Until an email from its author Michel Choquette turned up in his hotmail junk folder. The writer deleted mail - then retrieved it - to discover Abrams were publishing Choquette's book with same $100-per- contributor rate 2011 as recessional early Seventies. An editorial cost austerity cycle. Talk about fucking politics of time. With actual 'ballad' remaining unrevised, updates to beat generation ballads 'acknowledgements' from Michel were forwarded to Stephen Mooney and Will Rowe at Veer as ...Ballads was being delivered to the printer.

Abrams' contributors complimentary copy of The Someday Funnies arrived this week with cushioned packaging and other pieces of mail performance art - including promo from publisher. 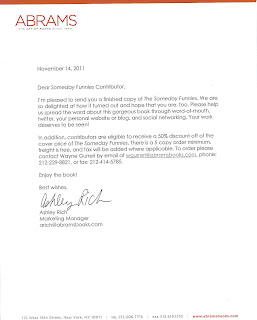