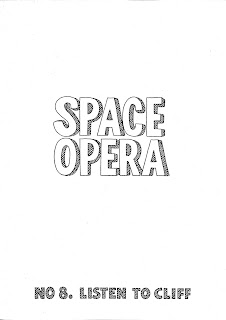 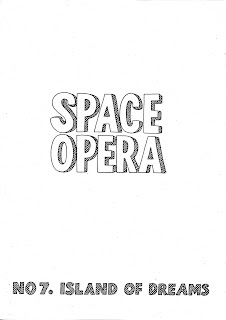 My life has been written.
Different scripts were submitted to the Divine Producer before I was born.

A return to white stock card for this September 1998 cover and only two pages of explanatory prose at beginning and end of author-illustrator Michael John Weller's picture story 'Island of Dreams'. Mike Weller's alterity is reduced mostly to two cartoon selves for this "tale from wellerverse". Two visual artists with a difference of extremes. One with conspiracy theory paranoia. The other with illusions of transcendental grandeur.

The issue opens with a full page comic strip entitled "Mike Weller's Recurrent Dream Between 1949-50". A divine yet buxom angel arrives in a small child's sleep to take him from his English Raymond Briggs-esque suburb, to sail through the stars on a Wing into the upper nebula, the Empyrean Rose outside Earth's solar system. There in the Celestial City, on a mysterious island, astral Mike is introduced by the angel to seven figures speaking in nullimaginatively shaded cartoon bubbles. Drawn in black and white, illustrator Michael John Weller's silent comic art is only broken by one question the small Mike-child, detached from its sleeping self, anxiously asks: YOU WILL BRING ME BACK?

This one-page comic strip based on a pre-school infant's recurrent dream that acted as inspiration for Mike Weller's Space Opera read through artist and writer characters Graham Cratchett and Eduard Mogilowski's "Cosmic Tales" of made-up legend. Weller's comic strip 'Island of Dreams' was first printed in Oxford Caption's 1997 comic book anthology Superstate Funnies. In the mid-2000s the artwork was greatly enlarged as an exhibition print-on-demand image for sale by the art group.

In one of Mike Weller's alternative fictions included in issue #7—alter-ego cartoonist creation Captain Stelling, commander of spaceship "Island of Dreams" (docked in white horse country), invites Mike aboard to escape 1998's Realists. Cap takes Mike through memories of his early life; returning lost selves from 50ies childhood to 60ies youth, read as a comic book drawn from pop's political youth culture of 70ies anarchy and 80ies MTV. And a close up of all-saints-spiced-up girl-powered late 90ies. Here three contemporary versions of Mike Weller appear together as caricatures in a strip-cartoon. The writer, the artist-illustrator, and author-librettist of his own Space Opera.

A 1972 end-picture by 'Stelling', drawn as fictional creation for equally fictional Eddie Mogul's Record Fun mag, shows a 1950s eggman John Lennon cartoon egging a Blue Meanie on to "kill the Beatles". In this story, 'All You Need is Love' turns into a murderous anthem of hate by New Dreamers starting with Lennon's own assassination as "Just John". New Dreaming "Jihardi Beatles" nurtured and fed from a 1960ies counter-culture gone horribly wrong.

A hand drawn poetry cartoon closes the tale: JOURNEY TO THE CENTRE OF MYSELF 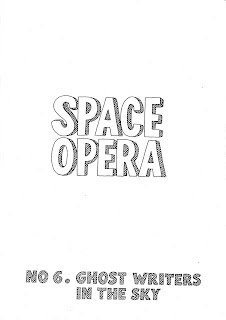 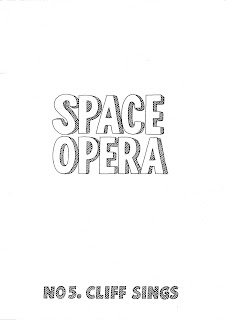