Veer to Conservatoire and beyond

It's five years since MJ Weller's docu-track Beat generation Ballads was first published by Veer Books. Partly inspired by modernist composer Michael Finnissy, the publication rekindled a dialogue between poet and composer for the first time in 45 years. A sort of beat generation ballad bonus track in itself.

Finnissy: […] you appeared to send me my message back asking if it was a musical score (which it wasn't intended to be), or did I misread

In 2013 Finnissy composed a large-scale work for piano entitled Beat Generation Ballads.The work has been described by its premier pianist-performer Philip Thomas on his website as an extraordinary 50-minute work, taking in Bill Evans, Allen Ginsberg, Bach, Beethoven, Irish protest songs, Webern and music by a 16-year old Michael Finnissy.

(note: post update May 29 2015)
The Huddersfield Contemporary Music Festival 2014 premiere recording of Finnissy's composition was aired on BBC R3's Hear and Now in April (after this post first appeared). Inspired by an interview with Finnissy featured in the broadcast Weller has made second e-supplement/complement to original Veer Book.

It takes the form of an animated docu-track. Sound recorded from a computer and squeezed onto a YouTube video -- Philip Thomas's beautiful playing ends up atrociously compressed. Until a recording company is able to release Beat Generation Ballads in high resolution Michael Finnissy's recorded five-part composition will fall short of full audio potential. 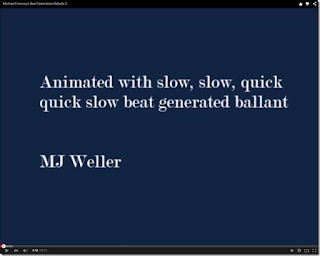