Although not formally invited to read or perform at Beckenham Bubble one - the writer, as part-organiser/curator of evening responded to request "do something" by improvising themes Fics from the Sticks bookwork.

1990's Beckenham writers group The Scribblers killed off through fictionalization as 'Addingcombe Nibs'. Not sure what audience, some former Scribblers, made of this.

@bromleylitfest Bromley Lit Fest
had a fab evening with the Beckenham Bubble at Becfest! 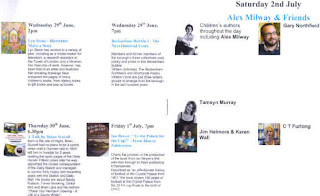 Most events in Becfest brochure have pretty image of authors accompanying text. Not this one. 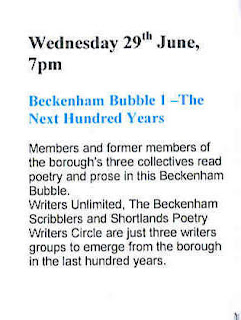 At Bromley Fest Tomfoolery launch two weeks ago organisers concerned not one single booking for Beckenham Bubble one. But who is this Mike Weller? Where is he exactly? And what is the nature of the realit(ies) he lives in? Why does he feel as if he is a character in somebody else's fiction?

Space Opera developed from this ...

A creative writers' group The Scribblers at Studio Beckenham was attracting interest and funding - and from the beginning of 1997 I was able to test reactions through public reading of Space Opera as work in progress and display its graphics content. The Studio Scribblers experience was rewarding through adopting a performance persona of live storyteller to receptive audience. Arts Council of England Lottery-funding of The Scribblers anthology On the Shelf and Off the Wall vol II meant I was able to extract a section of Space Opera for inclusion.
The Making of Slow Fiction (Home'Baked Books by Michael John Weller, 2010)

Receiving an invitation to participate in a local literary festival - the writer spent days humming and ha'ing whether to agree to take part, or not. Identical response before cautiously looking in on creative writers' group, short bus ride away, fifteen years before - the Beckenham Scribblers.

In 1996 something was in the air in southeast London. The writer was often able to identify 'things in the air' on his doorstep. A peculiar charge of localized preternatural energy perhaps; a combination of several extraordinary coincidences, maybe. Vitalized synchronicity associated within scribbling process of sudden collective realization, definitely. Like Beckenham Arts Lab formation quarter century before.

Then afterwards, the shaping movement of scribblers into tangible entity, losing bits deemed unnecessary to working model. A group of writers serious about their business emerges. Poetry is composed and read without comment or criticism. Brand names appear in fragments of text. A suggestion even of Scribbler commodification. Essential if product be sold arts market society.

'Island of Dreams' from Space Opera, MJ Weller 1997
No comments: 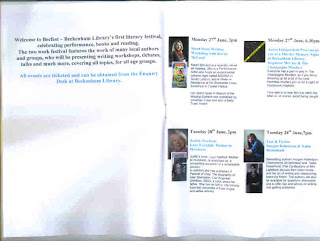 The writer's "Openned Letter to Allen Fisher on the question of poetry, place & poetics" (veer off, Veer Books, 2008) continues discourse on naming.
No comments: 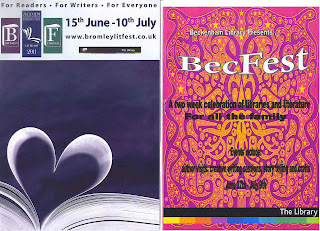 What are they all doing in Bromley?
No comments:

New media politics of networked space and new communities of interest, from global and local perspectives, seem likely to lead to more scenes within scenes, bubbles within bubbles - organized in the UK around county and district, town and city suburbs, and within region and locality.
- Mike Weller, 'Home'Baked: literary artzines in the age of the internet' (Openned Zine #1, 2010)

And just over one year later, the writer of this published monograph is invited to curate two evenings for Beckenham Literary Festival - the 2011 BecFest to be held within a bubble-space, in the open public lending section of Beckenham library.

BecFest has been organized both simultaneously, and within, a big borough-wide Bromley Literary Festival (Beckenham is one suburb of London's largest borough and dormitory town).

Both festivals are taking place as major shake-ups of Bromley's Library services occur, as they are in other parts of the UK. This means threatened closures, borough mergers, and library staff redundancies.

Bromley Literary Festival seems, to the writer, to be taking place in one locality and reality. BecFest in another locality and reality. Neither locality or reality has any notion of what the present writer's practise is. But a formal invitation to take part in some way arrived by old-fashioned letter post. The writer thinks the library service may think the writer a local historian because they did buy copies of his Harriet Staunton: A Victorian Murder Ballad (visual associations, 1999) for the reference section of its borough branches.

So does the writer agree to take part or not?

Beckenham librarian organizing BecFest, Vanessa Williamson, is encouraging about place-bubbles. There is perhaps a sense of last opportunity for poetry and poetics to be discussed and performed in a public space without pressure of providing profitable returns.

'Until Breton and Trotsky's Manifesto: Towards a Free Revolutionary Art is distributed free to everyone and the workers' democratic government is formed,' whispers ever-optimistic Mick.

On evenings Wednesday, June 29 and Monday, July 4th - there is likely to be numerous poetry events elsewhere - in cafés, pub-function rooms, university faculties, poetry-hegemonized venues - perhaps other libraries and litfests. In these realities nothing clashes when bubbles burst

The writer hadn't attended voiceworks (showcase of new music for voice) before. For several years this initiative, coordinated by Birkbeck Contemporary Poetics Research Centre with Guildhall School of Music & Drama, has been performed in association with Wigmore Hall - London's major international venue for song.

2011's performance in May featured seven songs including texts by poets SJ Fowler and James Wilkes. The writer had only just posted "Nature Boy" to this blog when Mr Wilkes explained all about an Urban Physic Garden plant project he was curating poetry contributions towards.