As part of the Southbank Centre's ongoing summer-long Festival of Neighbourhood, a free London Lines weekend was organised in July. Southbank, in collaboration with Jaybird Live Literature, invited writers and artists to each represent one of the thirty-three London boroughs with a poem. 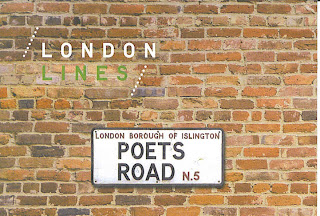 Along with some curious choices of poets and artists (and interesting use of creative division between performative, textual and visual labour) the use of one particular road sign to brand 'neighbourhood' as slightly vispo-geographical may be arresting to London avant-gardists and poetical militants.

89a Petherton Road, for anyone who doesn't know, was the working location and residence of Bob Cobbing up until his death. Basement flat no. 89a housed the print shop and archive of Writers Forum publications and New River Project. It was home and studio of Bob's widow Jennifer Pike up until her recent illness and departure from London for nursing care in the west of England.

Even in terms of political localism and cultural collaboration encouraged by liberal arts-oriented coalitions - the extent to which a borough actually represents real and poetically imagined vent-bubble rewrites, spatial bends, durational warps, secondary worlds - making up deep sea dives and aerial reconnaissance for wildlife, insect patterns, and human misbehaviour - is open to question.

Is there a possibility Islington Council or contracted Environmental Services could roll up sometime during Southbank's poetry-celebrating Festival of Neighbourhood and shove Bob and Jennifer's remaining archive in a skip destined for local tips, remote landfills, or other convolvulaceous neverwheres... 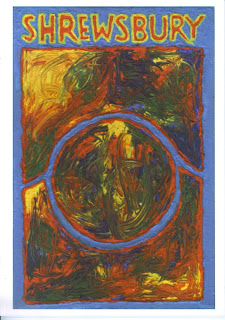 If "abstact comics" is cartoon art, it is not mainstream UK genre, nor part of the British & Irish small press 'indie' comic scene I wrote for The Making of Slow Fiction pdf (p. 24) a few years ago.

Content and aesthetics, however, are as different as means of production, distribution, promotion and exchange share similarities. Much had changed since 1960s counter-cultural days of Jeff Nuttall’s pioneering Writers Forum poetry-c(art)oon hybrids.

Things, however, are blurring again. Andy Bleck, a European-based practitioner of abstract comics and featured in Fantagraphics' Abstract Comics made his micro-zine available at Camden's street market comics stall in 2009.

Genre differentiation in any arts formation can have the effect of diluting a difficult concept into taxonomy, marketable without too many tears. This may not be so easy with Fantagraphics' The Last Vispo,- a sophisticated combination of poetry, art, and poetics.

Dalby has thought carefully about these questions. He writes as contributor-critic of Philip Davenport's The Dark Would at his own blogspot - santiago's dead wasp - a post linked to The Last Vispo's News/Reviews.

Dalby's avant object 19 is transformed from hard copy artzine (making best possible use of digital print-on-demand facilities to bring lovely 3D texture to reproduction) without imprint or publishing ISBN/ISSN (cf Clarke and Freer's similarly produced AND #13) to a bookwork object realization through zimzalla's colophon serial byline on back cover.


The content of Matt Dalby's object appears to have precedence in mid-20c British non-representational painting, influenced by American Abstract Expressionism. This school was made of two fine art tendencies - abstract landscape and conceptual abstract. The latter art was defined by their titles, naming what the viewer unambiguously perceived. That is, coloured rectangles, circles, squares in  movement and tension. The former abstract art evoked feeling: for sea, sky, rock, land, trees, beach, hill, mountain, and place (sometimes described and sometimes named). 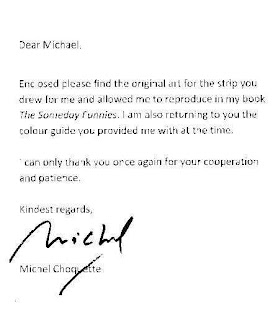 My original line artwork for The Someday Funnies was returned to me this week. Federico Fellini and Mike Weller were the only two contributors who drew their pages double published tabloid size, according to book's creator and editor, Michel Choquette. 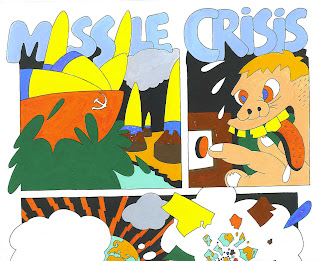 Choquette, on a visit to UK and Europe - is returning  originals to writers' and artists' families and estates. Those still living are signing their printed contribution in a unique copy of book Michel worked on for over forty years. The ballad of The Someday Funnies keeps singing.


Painting (above left) was completed before electronic print. As well as its time-capsule content Choquette's book is a record of print technology for producing visual poetics of cartoon art. This forty-year old painting was used as guide to assist Choquette's Canadian colorist Max (Salgood Sam) Douglas to work on my line original. A young man called  Mick began the analogue job. An elderly man named Michael signed the digitally published result. 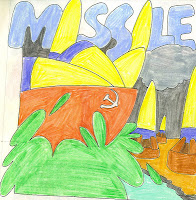 Fantagraphics, the US comics publisher who first discovered Michel Choquette's five decade hoard, didn't have resources to actually publish the book. They were unable to offer complimentary copies to all 169 contributors. Abrams took it on, delivering a copy to every living contributor - family and estates everywhere. Cities, towns, rural backwaters. Even Penge. The book is being bought by libraries.

But Fantagraphics are getting there fast. They are publishers of both 2009's Abstract Comics poetics and The Last Vispo Anthology mentioned here in an earlier post.