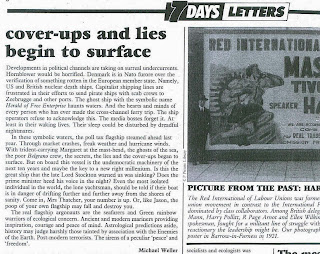 'letter against neoliberalism' appears in printed journal Veer Vier: For Will Rowe (Veer Books, 2013) launched at Birkbeck 28/9/13 and celebrated @blutkitt here
No comments: 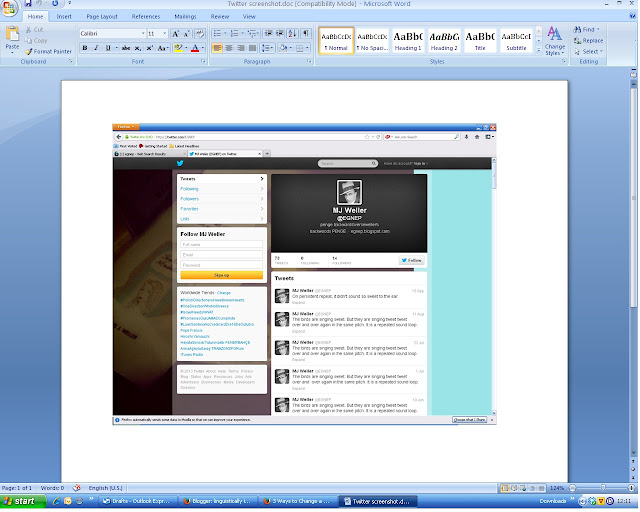 The birds are singing sweet. But they were singing tweet tweet over and over again in the same pitch. It was a repeated sound loop. On persistent repeat, it didn't sound so sweet to the ear.

Written in 2005 and self-published in 2006, before Twitter caught on, a Twitter account was opened  by M J Weller as EGNEP with the first two sentences of extract above used as present tense tweet on June 3 2009. Just over three months later, on September 24, the third sentence of the extract was tweeted.

Using Twitter as pattern-poem developed during four years; with the first two sentences tweeted four times every 20 days give or take a day (US time zone fluctuation), followed by the third sentence: ie, sentence one & two x 4 + sentence three x 1 - continued as 20 day loop until August 31st this year. A tweet by proxy mistakenly repeated sentence one and two a fifth time.

With correction to third sentence on September 15 - EGNEP figured, after four years, with fourteen followers, to deactivate the account. Openned's online zine documented pattern for a couple of issues. Stephen Willey's and Alex Davies's Openned poem was the only Twitter account followed by EGNEP as user. Alex did ask EGNEP in 2010, "How much longer are you going to continue tweeting this sequence?" EGNEP replying "Until I stop."

The account and sequence is ended today, September 20 2013, 20 days after the erroneous tweet. EGNEP's account is now technically deactivated and will be deleted in 30 days. Pity it's not 20 days but that's the social relationship between soft consumer user and social media prosuming hard driver.


The sequence was published as Sorry, that page doesn't exist (HomeBaked eBook, 2014)