Natalie d'Arbeloff has been presenting some "old sketches" on her blogs recently -- including these two pics of Bob Cobbing from the early 80s. 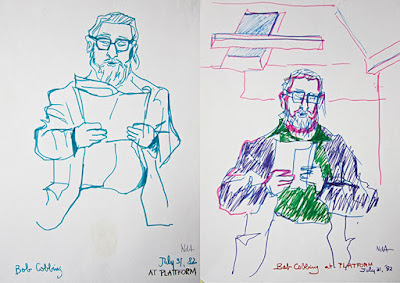 Blog(s) plural because Natalie has a genetic cartoon twin, Augustine. The present writer first met Natalie/Augustine at the beginning of the 21st century, introduced through the medium of what seemed a novelty in 2000 -- electronic mail. Both Natalie and Jennifer Cobbing had been sitting with young Apple fanboys in Mac-user groups throughout the late 90s. By the early noughties d'Arbeloff had introduced cartoon character Augustine to her digital world of online galleries and www blogosphere as avatar Blaugustine. Natalie's Blaugustine here is mirrored by Blaugustine's Other Blog here

Augustine's light however is still largely unseen by the neomodern art world because Natalie has lots of other bulbs flashing in multiple microspaces. The oh-so-marvellously-trending neoliberal arts establishment have difficulty with something they can't sell if it doesn't have a publicist's ready-made leftfield value on it: or useful and profitable baits in the hidden abode of promotions and sponsorships behind advertisers' pay walls and issuu-looking information freesheets. So not having brand value, Augustine doesn't appear to have exchange or consumer use value either. If this sounds like screwed-up marxist economics Metro, Stylist, ShortList, NME, Time Out freesheets etc., better illustrate developments. Titles with exchange, and therefore use value to capitalism in the 20th century; for example NME and London's Time Out when western youth culture was at its commercial height in the UK. Or another example; the London Evening Standard had one of the world's best syndicated cartoon-strips in The Far Side along with homegrown Bristow and Modesty Blaise -- all worth paying for. But NdA's codes, like theirs, now seem lost in an old pre-world mixed with a post-new-other.

Natalie d'Arbeloff is a social media-savvy artist, feminist, humorist, vocalist, teacher, corporate media competition lay entrant, writer, cartoonist-illustrator, theorist (her Designing with Natural Forms influenced Eric Mottram's Towards Design in Poetry referenced by Adrian Clarke in his introduction to Jennifer Pike Cobbing's Scrunch) and being these things at the same time in London, New York, Paris: and an arts centre masquerading as a Norwegian church in Cardiff -- an itinerant rhizomath.