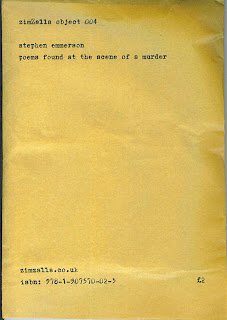 The British Countryside in Pictures the writer is re-reading. It has been re-read many times but not for donkey's years. A broken hardback, the end flypapers have added black and white photographs of Tissington village glued in by a former owner's hand with temporal glue stains of sixty-plus years. Fountain pen and faded ink inscription To Sheila and Rosemary -- From Wullil; Wullil; Wullil, January 1948 (underlined) With Supplements (underlined) by a friend. The Supplements are the added stuck-in photographs, also hand-inscribed with ink by the photographer who presumably took them.

The book can be read as found installation in postwar house. A sculpture, a physical presence - a living bookwork.

Book production is concrete and materialist process. Book unproduction is unbound poetry. Before book's broken pieces become phantasmagorical form again. Before its pieces become fetish object again. Book bits ready for waste collection ... *X No thanks Hardbacked books (we cannot recycle the cover - why not give them to charity?)... unbound beyond exchange/ consumer value. Beyond re-commodification.

Re-reading book content: lines from a poem by A. S. Wilson are selected by editor Brian Vesey-Fitzgerald to describe a section on THE GOOD EARTH (...) and the Publishers wish to express thanks to Miss Ruth Pitter, author of Romford Market and to Messrs. Macmillan for an extract from a poem by T. E. Brown.

The closest to sense of book as object - bookwork in process as sculpture and installation, received after the HomeBaked 2010 bookartbookshop show - were zimZalla's first four objects contained within a plastic stationery wallet.

zimZalla is an 'avant-object' project organized by Tom Jenks. Three of the objects (including an audio CD with its own avant-object; Matt Dalby's walksongs - which I listen to whilst re-reading The British Countryside in Pictures) - have individual ISBNs. An artzine object featuring three poets has a cover image instead of a title. A top-left-hand-corner-stapled A4 seventeen-sheeted paper report by Tina Darragh is another object, this one not bibliographically catalogued with ISBN. Stephen Emmerson's poems found at the scene of a murder is sealed in a 165mm x 115mm A6 envelope I haven't opened since receiving it.

I may open it one day.

* from a local authority refuse and recycling collection service update