Hello Mike
Thought I'd let you know I turned up at Beckenham Library at 18.30 tonight to find it closed. Tried front doors and back doors which were locked, and peered inside to see no sign of movement. What happened?
- email from Leonard Emmerson, former Beckenham Scribbler, participant in Beckenham Bubble 1, and expected attendee at Beckenham Bubble 2, July 4th 2011.

Two Becfest vents (I like descriptory "vents" - which may originate with Joseph Walton, ie, vent: slit at the back of a poetry jacket) have been cancelled this week. An audience of two turned up for one visiting author, and a second author cancelled as pre-bookings didn't reach minimum of twenty-five necessary to make visit viable. 'Literary festivals - who needs 'em,' laughs Mick.

Both Beckenham place-bubbles were planned for spaces within the public library lending section at end of evening for continuation after closing. Participants and attendees thought Bubble 1 an excellent night. 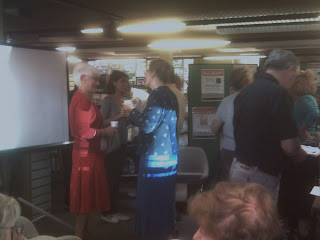 Hi Mike, I didn't get photos for Bubble 2 - I was too absorbed but I have a picture of the break during Bubble 1!
Vanessa Williamson
Assistant Group Manager (west)
Beckenham Library
0208 650 7292
vanessa.williamson@bromley.gov.uk
Vanessa, facilitator of Bubble 1 & 2, and the writer as organiser, agreed on draft for evenings (viewed as advanced docs by participants) without going into finer details of bubble-space.

Bubble Two took place in closed reference section - there were several pre-bookings - and Vanessa needed comply with housekeeping, health & safety requirements, use of local state venue after public closing. In the hour and a half Openned, Natalie d'Arbeloff, Leila Dewji, and press free press occupied space and made of it a vent.

On receiving copy of press free press's limited edition 'independence day self published and be blessed' text, the writer - being performative - improvised for about thirty seconds with to be and to be a book: then press free press read and voiced their text - made and printed during the Beckenham Bubble - to finally burst it.

One of the reasons we put the festival on was to find out what interesting literary activities and groups would come to the surface and I've really enjoyed meeting you and your fellow Beckenham bubble pals.